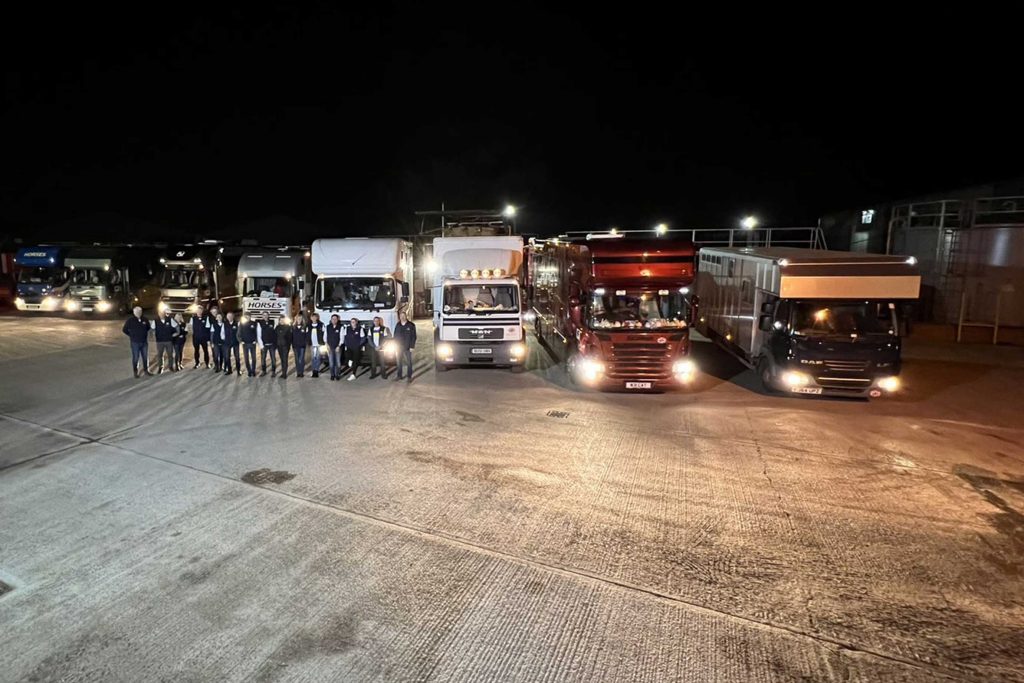 “First Mission Complete”, those were the words of Stephen Barnes and the Team at Ukraine Equestrian Relief as they returned to the UK after eight days on the Polish Ukraine Border.

Three weeks ago, Stephen (a founding member of Black Cat Building Consultancy) and a committed team, began their fantastic fundraising efforts after watching the absolutely devastating news and pictures of the millions of displaced women and children due to the atrocities still taking place in Ukraine.

“Prompted by some of the images on the TV of children and families, like the teams’ own, who had been caught up in blasts as they fled it lit a fire in me”… said Stephen.

Desperate to help in anyway, with anything they could, the team embarked on a selfless focus of helping as many as possible.  They went about contacting their networks and put appeals out to the media, press, friends, families and business contacts, with the magnificent generosity of people – they were able to full load nine horse boxes full of supplies including blankets, food, clothes, first aid and hygiene supplies. -In effect this is nine lorries full of aid, taking directly to help people who’s lives have been devastated.

Embarking from the UK to Poland would take them on over a 1,400 mile journey across the English Channel with support from Stenna Line for the ferry crossings, BD Fuels kindly provided the UK fuel for the convoy and across the borders with the support and generosity of many people along the way.  Even still managing to pick up further donations along the way.

“The support, generosity and time given by people across the board has ben exceptional, throughout” highlighted Stephen. “At times there were three crew per truck (two drivers and support) with logistics, finance and media people in the UK constantly keeping the ‘waggons rolling’ despite the challenges that cropped up along the way and getting into and out of a humanitarian crisis area”.

This included the actual wagons loaded with vital supplies from Online Home Shop, artificial grass for inside the horse boxes from Cheshire Artificial Grass, essential living supplies from TK Maxx Bury and further supplies donated from individuals wanting to help in any way that they could, ferry tickets, fuel, food, lodging – people have given what they can! 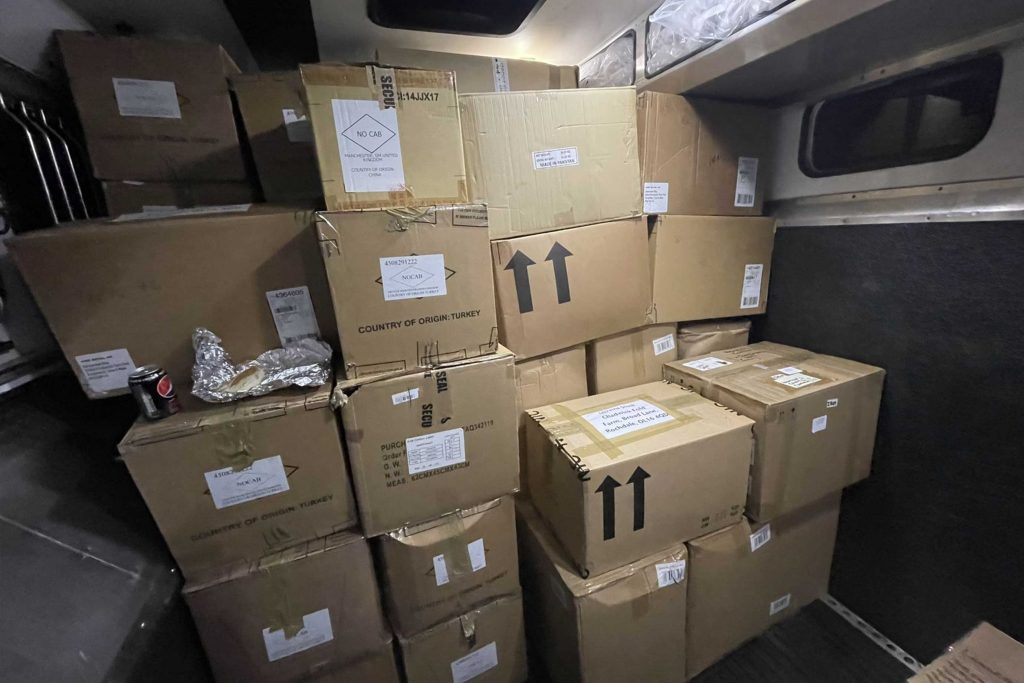 With their wagons packed, the team made their way to the Ukraine/Poland border.  Their first stop was Chelm in Poland where they replenished a warehouse supplying various smaller charities within Ukraine and along the border.

Once the wagons were unloaded the team took the decision to approach the respective refugee centres within both Chelm and Poznan to establish if they could assist with the provision of aid or with helping within the centres.

Each of the centres were incredibly grateful for the offer and provided the team with hand written shopping lists.  The Polish people did not want to ask for quantities and simply invited any amount of aid.

The team went on a shopping mission and for each centre they filled three trucks spending up to £8,000 in each shopping trip.  Before departing for the centres, they contacted them to communicate that they may need little help unloading!  When the centres learned of the scale of the aid being delivered they were overwhelmed and thankful.  They arranged for police escorts to bring the trucks in, for the army and the fire departments to assist with unloading and they invited the teams into the centres to talk to and interact with the refugees.

What is astonishing is that the delivery remains the largest delivery of aid that any of the centres have received and the team have been inundated with messages of thanks and Polish social media posts talking of the big English lorries that brought aid and toys.

Such has been the response and support for this simple idea that the team are now planning a second aid delivery and they are actively looking into other ways to support the Ukrainian people and their Polish hosts. 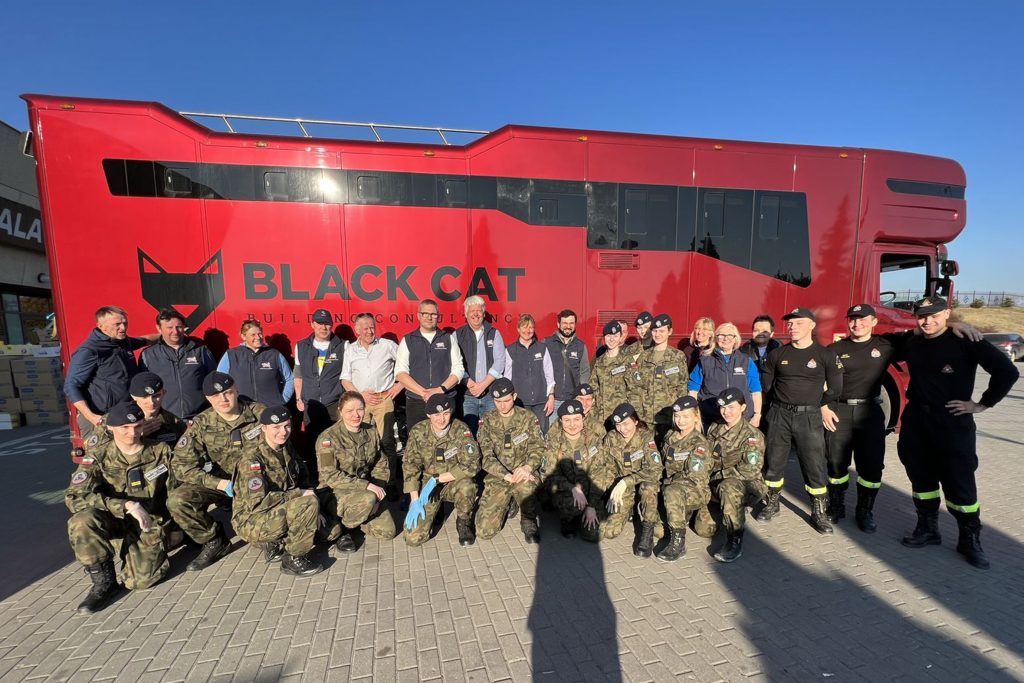 The team returned to the UK over the weekend having covered thousands of miles, with some harrowing stories and they had been truly impacted by what they experienced.  They have already attended several events, invited to speak of their experiences as they receive offers of support from further afield.

We look forward to supporting Stephen and the wider team with their next trip and to support this once in a generation crisis where we can….

Today the GoFundMe page has raised over £50,450… a phenomenal figure and that’s still growing!! If you would like to donate, please visit their GoFundMe page and give what you can: